I haven’t hiked Timp in many years, and my memories of it weren’t good ones: I wasn’t in decent physical condition and remember thinking “I will never do this again.” But I’ve been running for over a year and done a few hikes lately, so naturally I decided to do the most grueling (yet feasible) approach I could think of: South Timpanogos (aka Second Summit) from Aspen Grove (almost 15 miles). 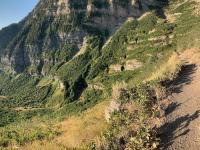 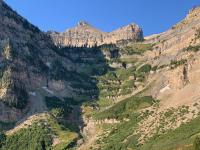 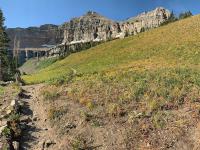 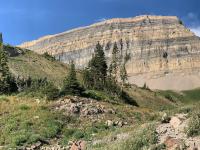 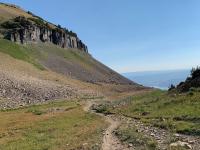 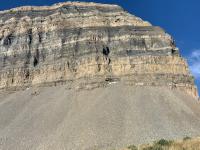 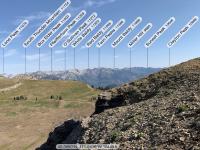 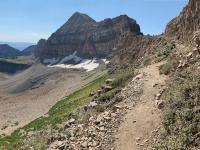 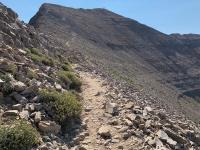 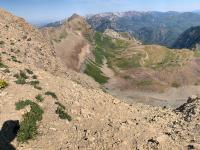 I reached the Mount Timpanogos summit in 3 hours 45 minutes—a personal best since I’ve never tracked it before. I’m trying to maximize my enjoyment of hiking, so speed isn’t my focus.

After spending a few minutes enjoying the views, I left the summit for South Timpanogos. The main caveat I found is that the ridgeline trail from Mount Timpanogos to South Timpanogos has a fork in it. If you stay left, you will eventually find yourself atop a 10–15 foot precipice with a class 3 scramble down if you wanted to chance it. I was not in a gambling mood and turned back, found the fork I had missed (the right fork is somewhat faint) and doubled back (this mistake added about 17 minutes to my hike).

The trail from Mount Timpanogos to the Glacier Saddle is narrow but easy going. The first few hundred feet from Glacier Saddle up the ridge toward South Timpanogos was moderate, with the trail fading out among the unstable rocks. The last few hundred feet up the ridge to the top was a class 2+ scramble: hands on the ground and a lot of large, loose talus (Qmt, Oquirrh Formation quartzite and limestone), and some exposed edges. The peak rounds out a bit and the talus gets small and flat. 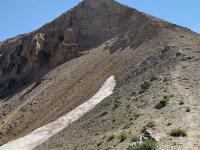 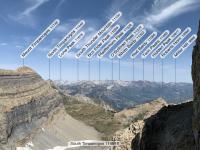 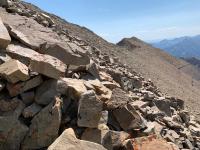 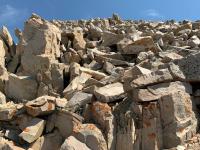 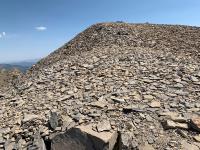 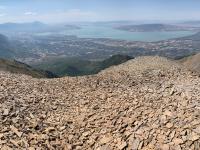 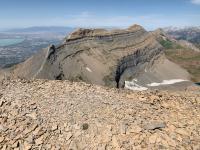 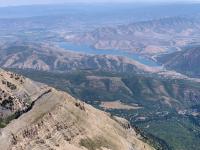 The way down from South Timpanogos was slightly better because I could see what looked like a trail. On the way up, I looked down from the saddle toward Emerald Lake, and was apprehensive about going down that route: the upper snowfield was very steep, short, and ended in large, loose rocks. But by the time I reached Glacier Saddle again, I had changed my mind (mainly lazy motivations: I did not want to regain the 400 feet I had lost coming from Mount Timpanogos).

I decided to skirt to the east of the upper snowfield, slide down the rocks to the main snowfield, then glissade down to the lake. This worked out better than I had thought. The rocks are really loose and slide easily. I almost felt like I was rollerskating.

The main snowfield was a little more challenging: it is strewn with small (softball) to medium (basketball) sized rocks. It was a good quad-burner going down until it flattened out. At the bottom of the snowfield there is a clear trail leading around the west side of Emerald Lake where I joined the main Aspen Grove trail. 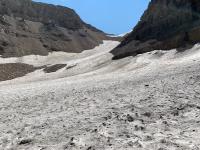 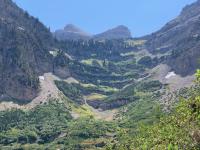 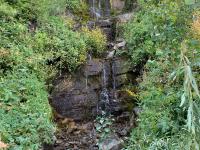 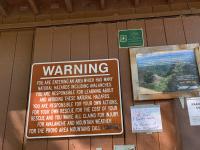 Late summer water sources are harder to find. Mostly dry washes and a few trickles here and there. The best opportunities for water were at mile 3 just before the second set of switchbacks, mile 4 in the third set of switchbacks, and just before mile 5 in the Emerald Lake outlet stream. There’s a great spot where the trail crosses the stream. After Emerald Lake, there is no more water (unless you count the snowfield under the peak at about 5.5 miles in Timpanogos Basin).

Here are my GPS tracks: